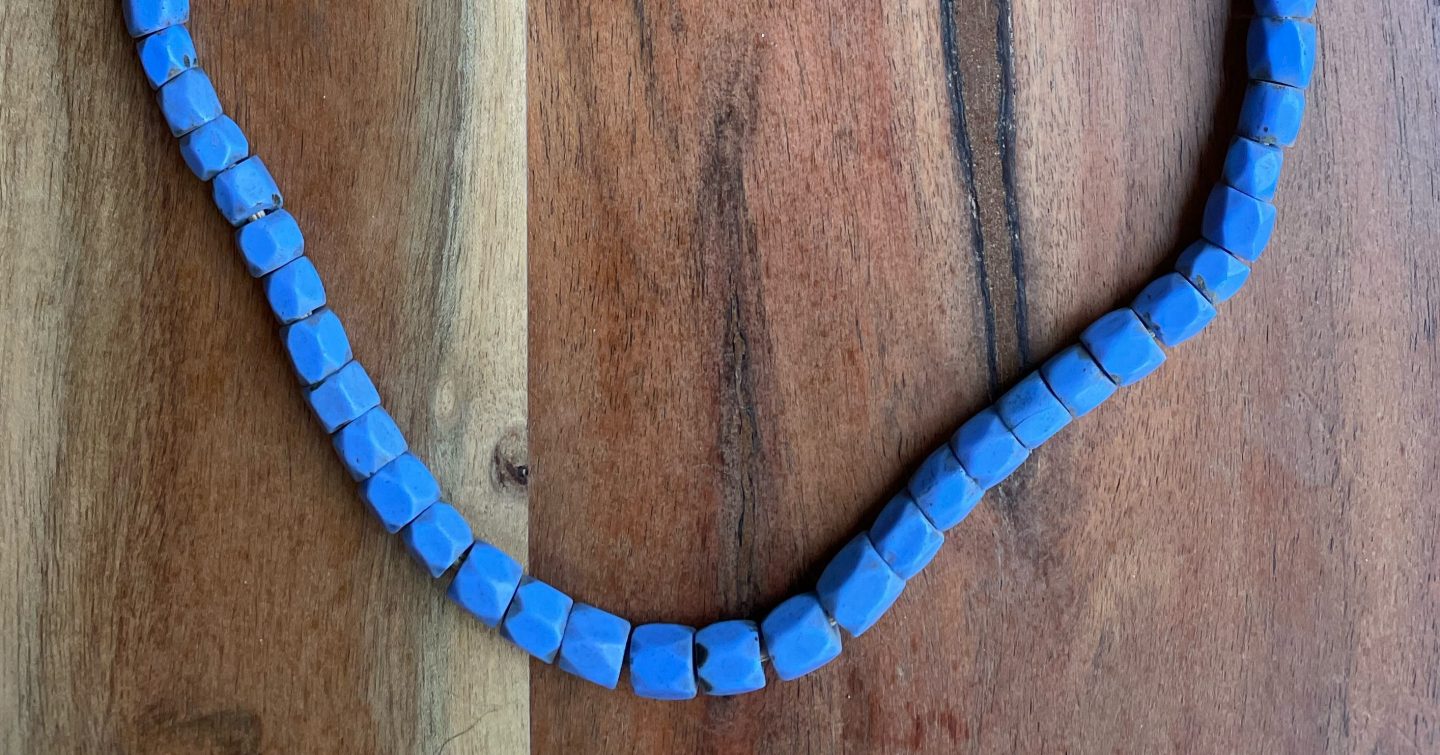 Fostering Connection Through Objects and Artwork

I spend moments of any idle time I can carve out from “lodge life,” scouring old stores, small art galleries, online auctions, and garage sales on the hunt for historic Alaska artifacts. Now the proud steward of several pieces that help bring the past to life at our Winterlake and Tutka Bay properties, I’ve added a new story I am fascinated with. I love sharing these items, which offer our guests and me a deeper connection to the land and the people that came before us.

One of my personal treasures is a string of beads originating from an unbelievable distance to serve as currency for Russians trading with Native Alaskans back in the 16th century. In addition to the beads, a painting depicting this unusual trade item has long captured my imagination, Fred Machetanz’s 1970 painting, Story of the Beads. I’ve recently purchased one of his prints, and I’m excited to get it framed and hung in the lodge to share with our guests.

The Artist and Painting

Fred Machetanz, one of Alaska’s preeminent artists, first came to Alaska in 1935, where he traveled to Unalakleet to visit his uncle at his trading post. He spent two years in the village on the Bering Sea Coast before returning home. The call of the wild led Machetanz back to Alaska in 1942, where he met his wife, and the two settled in the Matanuska Valley, where they would remain until they passed in 2002 and 2001, respectively.

Machetanz’s art brought to life the region’s native people and arctic wildlife. His technique, which used layers of translucent glazes, gives many of his paintings a luminous quality – a bluish hue – which perfectly captures the quality of light and how it plays against the snow. Northerners know this shade of blue-gray-white well, particularly during our long winter months.

In Story of the Beads, elders hold a string of chunky blue beads as three girls gather in front of them, sitting on the ground. All are dressed in their traditional kuspuks, hooded overcoats with large front pockets, their hoods trimmed with fur to block the wind.

As Machetanz describes the 1970 painting, “Three youngsters listen to a story about trading beads told by two great-grandmothers in Unalakleet on the Bering Sea coast.” Behind the group in the painting is a log cabin. “Unlike most Eskimo villages,” Machetanz writes, “Unalakleet is located near dense forests of spruce and birch, which furnished the building materials to make log cabins possible.”

Glass cobalt beads, much like the ones depicted in Story of the Beads, were brought to Alaska in the 1700s by Russian traders who crossed the Bering Strait. Used as currency with Alaska Native people, a beads’ worth was based on its size. According to Machetanz, “It was said at one time, a single bead would purchase an umiak load of furs.”

(An umiak is a small open boat used for transport and whale hunting.)

It boggles the mind to think these beads were carried halfway across the globe hundreds of years ago. The beads originated in either Venice, Italy or Bohemia (now the Czech Republic), and traders carrying them would have crossed Asia minor, China, and Russia.

(For reference, consider this: a journey from Moscow to the Kamchatka peninsula during this time would have taken approximately one year.)

Going as far as they could on foot, an arduous and often deadly journey in a ship across the Bering Strait would have brought the beads into Alaska. From there, the beads could have been traded amongst native groups throughout Alaska.

Story of the Beads is currently hanging (along with a lovely strand of authenticated 16’th century trade beads) at Tutka Bay Lodge.

Alaska has always fascinated those seeking pristine wilderness and adventure travel, and even for us who make the Last Frontier our home, it remains a marvel with a rich history that is still being discovered. We can’t wait to share our wild spaces, as well as the unique relics, with you.