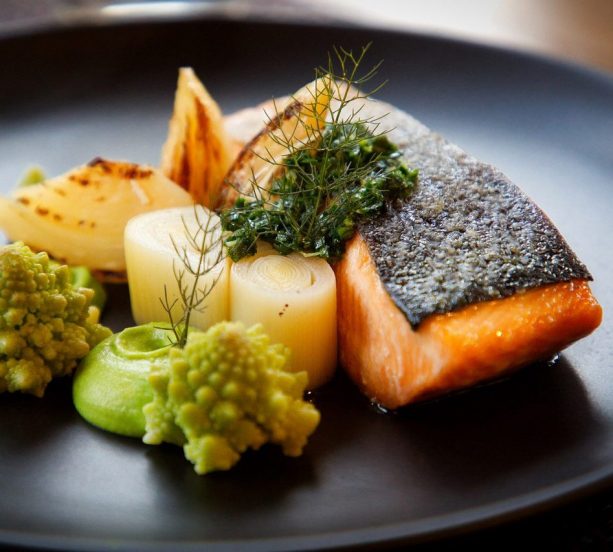 Our talented team talk food, breathe food, and dream about dishes we’ll prepare in the upcoming season. Our kitchen crew share a passion for culinary adventure – and service to our guests. Meet our chefs. Talk to them, learn from them and with them. And, if you have the inclination, join us anytime in the kitchen.

We communicate to our guests through our cuisine our love of Alaska, love of the Pacific Ocean, and the clean, wild soils we work with in our gardens.

Kirsten has been cooking in the backcountry of Alaska for more than twenty years. She is a passionate culinary student, educator, and an avid gardener. Kirsten spends most of her time at Winterlake Lodge, where she frequently teaches cooking classes in the kitchen or gives tours of the herb garden.

Kirsten attended culinary school at the Cordon Bleu in Paris, and she holds a master’s degree in gastronomy (food history) from Adelaide University in Australia.

She has published several cookbooks, including The Winterlake Lodge Cookbook, and is currently working on a new book project. Kirsten completed an MFA program in creative writing at Goddard College, Vermont. Kirsten has written for and has been featured in many national and international publications.

Kirsten won an award for “Best Female Chef USA” for The Winterlake Lodge Cookbook at the Gourmand International Cookbook Awards in 2004.

Chef Mandy Dixon frequently instructs at the Cooking School at Tutka Bay. She attended Le Cordon Bleu cooking school and continued her education at the Culinary Institute of America in St. Helena, California. She worked for the Thomas Keller Restaurant Group before returning to her family business in Alaska.

Mandy is currently the chef at Winterlake Lodge where she prepares meals and desserts for guests. She oversees and manages the La Baleine Café in Homer. She frequently travels in pursuit of culinary education and teaches often.

Mandy was recently a featured chef at the James Beard House in New York.

Kirsten and Mandy oversee our team of eight seasonal chefs that join us at Winterlake Lodge, Tutka Bay Lodge, the Cooking School at Tutka Bay, and the La Baleiene Cafe.

This is Nick’s fourth season with us. He is the chef de cuisine at Tutka Bay Lodge. Nick’s experience is vast in fine dining, mostly in and around famed Bay Area and Napa venues. Nick’s time in Napa taught him to respect and balance the flavors of seasonal fresh produce which he often does with the sea salt he has gathered from the ocean outside his front door at Tutka Bay Lodge. He might be trying hard to look serious in this photo snap, but Nick is literally always smiling.

This is Tim’s fourth year with us. These days, he spends much of his time at Winterlake Lodge in the summer but he tries to come down to Tutka Bay Lodge several times throughout the season.

In the off-season, he focuses on recipe testing, searching out farmers and purveyors, assisting chefs with finding Alaska artisan products, and he crafts ferments and pantry products in our Anchorage-based test kitchen.

Tim has worked as executive chef at Tutka Bay Lodge in the past and he was instrumental in our newly published cookbook project, “Living Within The Wild”.  Tim is an athlete who mountain bikes the hills and trails around Alaska. Tim also works as a guide for Carl and heads our Heli-Bike program.